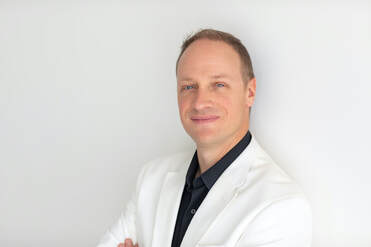 Born in Chicago, IL and the son of a Lutheran Pastor, Andrew Senn experienced music as an important part of his childhood. Piano lessons began at age six but his focus switched to the organ when he was twelve, studying with William Alyesworth. Several years later, he was accepted on a full merit scholarship to the Curtis Institute of Music in Philadelphia, PA where he studied with John Weaver. Upon his graduation in 2000, he was offered a combined position of Organ and Choral Scholar at Truro Cathedral in Cornwall, England where he worked under Andrew Nethsingha. He has enjoyed further organ coachings with Martin Jean, Kimberly Marshall, and David Schrader. Andrew was a finalist in improvisation in the 2013 Luxembourg International Organ Competition.

Andrew has been Director of Music at The First Presbyterian Church in Philadelphia since August 2006 where he oversees a professional choir, introduced a volunteer choir, as well as a prestigious concert series that includes programs of solo instruments, chamber recitals, and choral concerts with orchestra. Notable programs have included J. S. Bach's "B Minor Mass" and "Saint John Passion," Maurice Duruflé's "Requiem," and Francis Poulenc's "Concerto for Organ, Timpani, and Strings in G minor." Bach cantatas with orchestra are frequently offered during Sunday worship services. Since 2011, Andrew also has served as Organist/Pianist at Reform Congregation Keneseth Israel in Elkins Park, PA.

Known for his commanding and colorful performances, Andrew has been featured as a recitalist across the United States and Europe. American venues have included The Cathedral Church of St. John the Divine and St. Thomas Church in New York City; St. Philip's Cathedral and Peachtree Road United Methodist Church in Atlanta, and Old West Church in Boston. European performances have taken place at Evangelische Saalkirche and Evangelischen Johannesgemeinde in Germany as well as Christchurch Priory, St. Paul's Cathedral, and Westminster Abbey in England. As a student at Curtis, he also was an assistant organist of the Wanamaker Organ in Philadelphia where he performed over 2,000 recitals.

James Hildreth has said the following about Andrew's debut recording on ProOrgano which includes works by Reubke, Willan, and Vierne: "These performances are a rare combination of authentic interpretation and personal flair - Élan Vital! They compel one to sit up and listen." Gaining a reputation as a fine composer and arranger, scores and information about other recordings are available at www.andrewsenn.com.